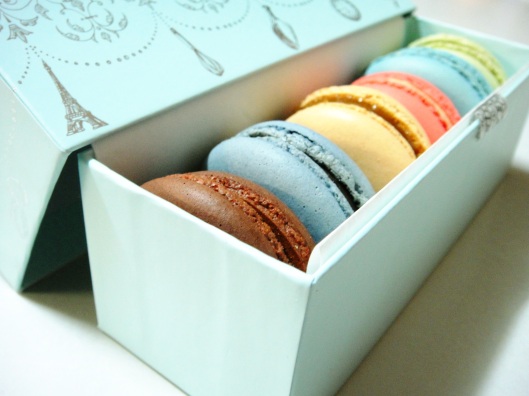 My sister brought these back home for us last night and she kindly let me eat a blue one with a ganache filling. Neither she, nor I knew what the flavour was, but I thought it was a little peppery. I liked them because they were smooth to touch, not broken in the packaging and not dry at all on the inside. Delicious! *sits in bliss*

There is massive debate on the correct pronunciations of these sweet, tasty little goodies, which really, in my opinion, is irrelevant to the actual enjoyment of these things.

Macaron, or macaroon – which is it for you?

After reading about 20 articles, all of which seem to repeat the same arguments over and over again on this seemingly controversial topic, I feel a little bit like some of my time has been stolen away from me.

By that I mean that there is nothing wrong about whether you choose to call them faithfully by their French term, or their “incorrectly transliterated English term”, macaroon. After all, if the chosen term is mutually understood by the speaker and listener, then is it really an issue to rage about? For me, it is more the fact that there is an argument surrounding this inane topic that is what’s irritating.

Does referring to the treat as a macaroon really make you an ignorant individual, unaware that a macaroon is completely different in size, taste, shape and texture to the French macaron? Or are you just arrogant and inflexible when you insist that it should only be referred to as a macaron, just like the French do? These kinds of personal attacks appear in some writing and honestly are just souring to read; though, unfortunately, they are not limited to a the tiniest minority of the debaters.

I, myself, prefer to be technically (linguistically?) correct (faithful toward the original?) and use the term macaron, but I’ll admit, since I was introduced to them as macaroons, and because everyone around me refers to the as that, I have a tendency to call them macaroons more often than not. However, I do also feel that the sound of the word ‘macaron’ is more apt in expressing the right feel to these treats.

To elucidate, the last syllable, ‘-ron’ gives me the impression that they are small, delicate, light and round things. It also makes me think of little round things rolling away, though this is most probably irrelevant to my point, and the item itself. In comparison, the impression that ‘-roon’ leaves on me is also of something round, however, it is denser, heavier and more homely sounding. And though only by the slightest amount, ‘-ron’ sounds more fun.

It is impossible to summarise completely and succinctly the different situations in which the term ‘macaroon’ and ‘macaron’ developed, nor definitively state the geographical variations of the terms. Though, suffice to say, after reading the many angles in which people justify their use of their chosen word, I feel that people are wasting their time and breath judging others for the term they choose to use.

Due to my slightly pedantic (and quite possibly overbearing) nature, as well as my liking of keeping things simple and differentiated, I have a bad habit of mentioning (perhaps in a Hermione-Granger-like tone) to people who call it macaroons in front of me for the first time that the French word is actually macaron and that the word macaroon may refer to other types of biscuits such as this and this.

In this sense, I guess I’d say I’m more pro-macaron and anti-macaroon.

Ladurée, is considered, in general, the pioneer of macarons, and it’s store in France is touted to be a place to visit for tourists. There are a few misleading arguments in favour of the term ‘macaroon’ which points out that the English version of the website makes correct, the term ‘macaroon’ in English:

“Once cooked and filled, the macaroons…”

However, this is an invalid argument (for either sides) from my perspective considering that when I actually went onto the site to check, there was evidently an inconsistent use of terms – in other words, there are instances where ‘macaron’ is used:

“The story of the Ladurée macaron…”
“The existing range of macarons…”

There was another post I read, which seems to rage specifically at Aussies to “get it right” – and though quite a few people would contribute the widespread use of ‘macaroons’ as the fault of a slip up on Masterchef (in 2009, I believe?), I am a little uncertain as to whether this is actually truth or not.

Anyway, I digress, and wanted to note that the term ‘macaroon’ is not only used in Australia. If you trawl around the internet enough, you will see it is also used in the US and Canada too. (Though I’d like to have a more comprehensive list, I really could not be bothered looking through all that many posts.)

However, I must say that I am not offended by the writer’s frustration in her post, as I can understand having such frustrations which seem meaningless to others, being the type of person to care about small things.

There is also a zine containing the anonymous author’s ramblings about anything and everything to do with macarons they could possibly think of, called Macarons are not Macaroons. I have not read it, and do not have intention of doing so, unless the publication falls right into my lazy hands, but if interested, perhaps you’d like to give it a go?

Actually, thinking back to what I wrote, I have forgotten something. I was actually introduced to the term macaron through the OP of the anime Yumeiro Patissiere, when our now dead sub-group, Macaque Subs (we did like, what; two episodes, I think it was?) as a translator of sorts. I thought the word as pronounced in japanese 「マカロン」 (makaron) sounded cute, but it never struck me to further look it up. What more, I don’t remember if back then, we decided on the macaroon or macaron for the translation.

What I meant to say in the paragraph above, but never quite reached that point was that it’d be an interesting thing to go back and look at as to more correctly remember how I came into contact with macarons.

Where are the best macarons, you tasted?

FURTHER READING
Some are interesting, some are controversial, some are perhaps, a tad old.
Serious Eats – An Introduction to French Macarons
The Nibble – The History of Macaroons
npr – Move Over Cupcake: Make Way For The Macaroon
Syrup & Tang – Melbourne’s not so great macarons, plus rubbish in Epicure

Error: Twitter did not respond. Please wait a few minutes and refresh this page.